Picking up where the original build left off;

The engine went into the car just as it came off George’s dyno in 2006, the only change being replacing the OEM oil pan with a STEF’S fabricated oil pan shown below: 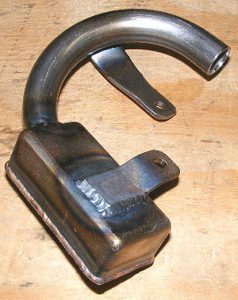 The pan swap was an attempt to resolve a pronounced oil control & windage issue that was exhibited by the factory oil pan over 5000 rpm on the dyno. Unfortunately the STEF’S pan did not resolve the issue, but more on that in a moment.

Once the car was completed, I drove it for a while on the street, but I began to notice quite a bit of oil smoke coming from the exhaust. In 2014 I decided to pull the engine and find out what the source of the issue was. As it turns out, the block had NOT been honed with a torque plate as I’d instructed during the first build, and this caused a clearance issue with the pistons which caused several of them to scuff the skirts. Obviously ring seal was history at this point as well, hence the smoke.

The block went to another local machine shop where everything was cleaned up, and the block was re-honed–WITH torque plates this time! A new set of custom AutoTec pistons were ordered with a slightly smaller dome volume to reduce the compression ratio down from 11.2-1 to 10.5-1 to allow for a bit larger & safer tuning window. The new pistons also featured a 1.5-1.5-3mm ring package as opposed to the original piston’s 1/16-1/16-3/16 package. I was long skeptical about running thin low tension rings on the street due to potential longevity issues, but ring technology has progressed by leaps & bounds since this engine was first built, hence the change.

The engine again went back together exactly as it was during the first build–no changes other than the pistons & rings, so there’s really no updated build pics to share.

Once the engine was back together, I made arrangements to dyno it again, this time at Kammer Racing. I put the engine back together as closely as I could to the original build so I could re-establish a new accurate baseline. There is one significant change we had to make from the first round of testing–the original series of tests utilized a pair of 3′ long collector extensions and a pair of Walker 3″ mufflers, which actually showed an increase in power over open exhaust. Unfortunately there isn’t room to run the same exhaust system on Kammers dyno, so all testing was performed with 18″ open collector extensions. 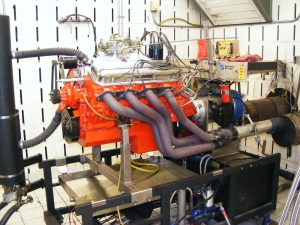 A couple of light pulls were made to make sure everything was happy, then we let her eat. Here’s the first power pull:

As you can see the numbers are very comparable, so I consider this a valid baseline comparison.

Pull #4 was a water/oil temp test. Pull #5 saw a swap from the 3418 carb to the 4781, but the pull was aborted due to the choke slipping closed during the pull. 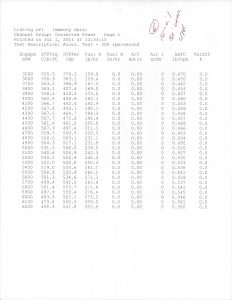 There was a significant increase in power at higher rpm with the 4781, but note the brake specific numbers between it and the 3418–the 3418 is going very rich up top. I’ll be recalibrating the 3418 further and re-testing it again somewhere down the road.

Pull #7 was an oil level test.

Pull #9 was a swap from the OEM points distributor to an MSD unit. The curves were similar and the total was the same. 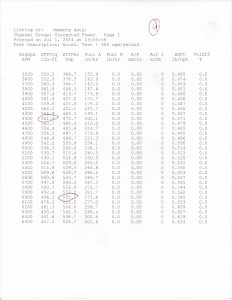 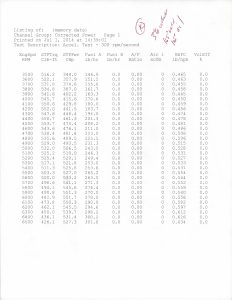 Pull #11 was another water/oil temp test.

Pull #12 saw another drop in water/oil temps, and power went up again. 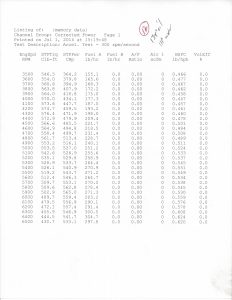 Pull #13 saw the 163 intake swapped for a heavily ported Holley Strip Dominator intake which was built for another (as yet not shown) engine project. 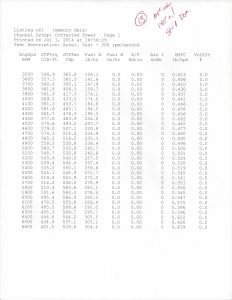 Pull #15 saw a lash change on the exhaust valves only. 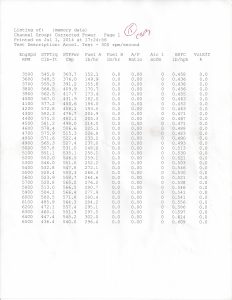 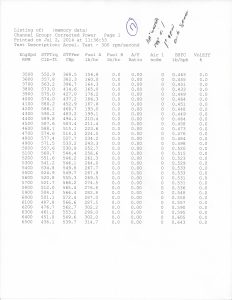 Pull #18 saw the addition of a 14X3 air cleaner. I tried to install the OEM air cleaner but I forgot that the base won’t clear the secondary pump lever on a double pumper carb, so I had to use a “generic” aftermarket base. 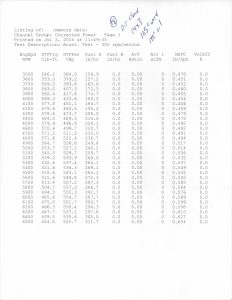 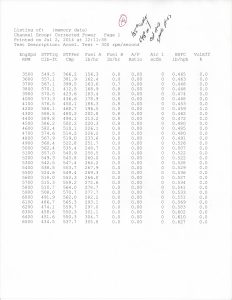 Pull #20 was the removal of the choke blade. 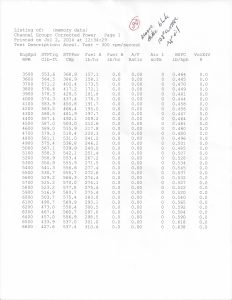 Pull #21 was another ignition timing change. 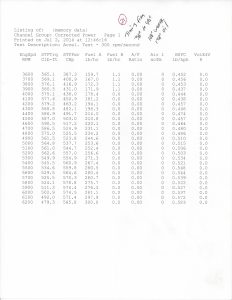 Pull #22 put the timing back where it was and saw a change from the 2X 3 1/2″ headers to a pair of 1 3/4 X 3″ headers to see if they would recover the low end torque that was lost when the collectors were changed. They didn’t. 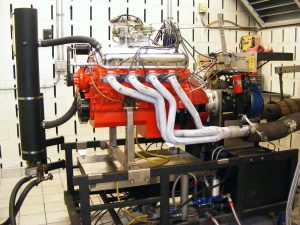 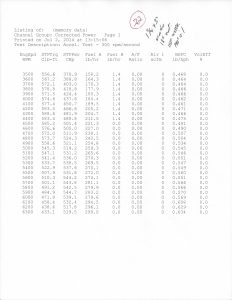 Pull #23 was a swap to a pair of equal length race headers with 2 1/8″ primaries and 4″ collectors. Surprisingly these headers provided the best peak torque of the session. 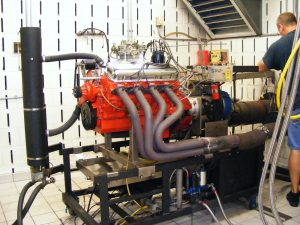 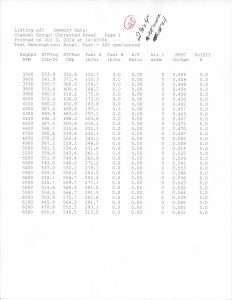 Pull #24 went back to the 2″ headers and a change in intake valve lash. 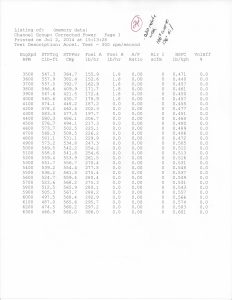 Pull #25 was the final pull of this session and saw an intake lash change in the opposite direction. 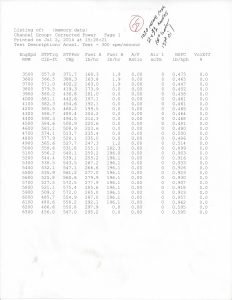 At this point the engine was pulled off the dyno…but not for long.
As a side-note:

Below are the gains from the first pull of the first session in 2006 and the last pull of this session. The numbers in parenthesis are the current figures.

Getting back to that STEF’S pan…unfortunately the engine was still exhibiting the unmistakable signs of oil control issues during this round of testing. Knowing these issues were still present, I made the decision to use another oil pan which was on the same engine project that donated the Holley Strip Dominator intake. The new pan was a Milodon #31188 which featured a full length windage tray and a passenger side kick-out. I also replaced the M77HV oil pump with a standard M77 pump in the hopes of freeing up a few more hidden ponies.

I scheduled a 3rd dyno session the following week to re-test the oil pan swap. I also built a Holley 1000HP carburetor main body to test with using the 4781 850 as a base. I also changed the collectors back to 3″.

Pull # 26 was the first pull made after the oil pan & pump swap. Note that all the previous pulls were made at 300 rpm/second and dyno guy forgot to switch it from 600 rpm/second for this pull. 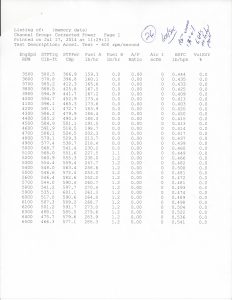 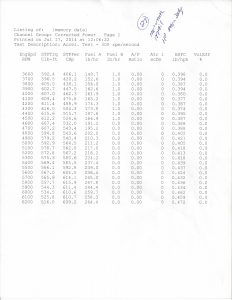 Pull # 28 was a swap from the Holley Strip Dominator intake and 1″ open spacer back to the 163 intake with no spacer: 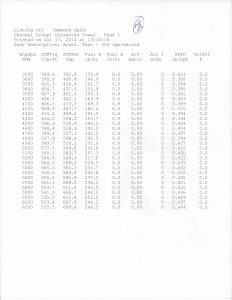 Didn’t care for that at all.

For the 30th and final pull, I just happened to remember at the last minute that I’d neglected to re-set the intake lash back to spec after the 25th pull, which was the conclusion of that session. I had them set at .030″ and the card called for .024″, so the lash was tightened back up. The engine was cooled back down to 110°/140°. 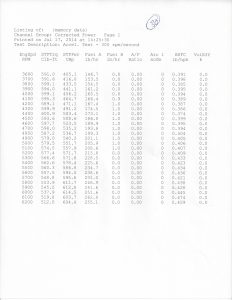 There is still more to be had, but I’m more than happy with the results at this point. Again, this is all with bone stock cylinder heads with nothing more than a good 3 angle valve job. A cylinder head upgrade is already in the works, but that will have to wait for a bit– perhaps next year. I’m confident 650+ HP is well within reach at this point.

Thanks for reading along.