While I had initially hoped to bring you a substantial amount of information about this particular engine build, certain unforseen circumstances have unfortunately resulted in a somewhat abbreviated amount of data. However, as the old saying goes, “A little bit of ‘something’ is better than a whole lott’a ‘nothing.'”

So without further ado… During a recent visit to the facilities of the legendary “Ohio” George Montgomery, George and Gregg made casual mention to me about a rather “interesting” project they were just putting the finishing touches on for one of their customers.

I followed behind as George and Gregg made their way through the back hallways of their shop to the dyno cell. George leaned over the console and flipped on the light switch to the dyno cell, and I was literally stopped dead in my tracks by the sight of an honest-to-God Ford 427 “CAMMER” engine resting quietly on the dyno.

I stood there for a moment, quite taken aback by the sight of what is quite literally a priceless piece of automotive racing history.

Once I picked my jaw up off the floor, I naturally blurted out “What’d it make?!”

Gregg informed me that they hadn’t yet fired it up on the dyno, but that it was scheduled to run in roughly a week from that day. Gregg then asked me if I’d be interested in coming by again to hear it run.

If ever there was a silly question…

I obviously agreed, and inquired if I might be permitted to bring along my video recorder to capture what surely would be a once-in-a-lifetime opportunity for me. George and Gregg both enthusiastically agreed.

For those of you who are at least somewhat familiar with the rather illustrious racing career of the legendary Mr. Montgomery, you should also know that the terms “CAMMER” and “Ohio George” go together like peanut butter and jelly. George was one of the privileged few who were afforded (no pun intended) the opportunity to race these engines in their glory days. George’s success with these engines was in no small part responsible for the legendary reputation these engines possess today. A mutually beneficial relationship between man and machine, to say the least.

I arrived on the scheduled dyno day with my video camera in tow, ready to capture and share with whomever might be interested an experience few have been privy to for over 40 years.

I was asked not to divulge the exact details of this particular engine, but I was permitted to disclose that this engine is of essentially stock displacement with an OEM Ford crankshaft and connecting rods, 13.5-1 Venolia pistons, mildly-reworked factory cylinder heads and intake manifold, OEM Ford Holley carburetors, a factory Ford ignition, and Crane camshafts of undisclosed specifications.

While I am not at liberty to discuss the actual figures this particular engine would produce, I am able to divulge that, according to Gregg Montgomery, a previous dyno session with a different bone-stock 427 CAMMER engine equipped with 2 4-bbl Holley carbs produced an honest 616 horsepower on their admittedly stingy dyno.

You can extrapolate from there to your hearts content.

So without further ado, I give you a somewhat abbreviated video clip of the engine running on the dyno. I do need to mention that while I was able to capture a bit of decent footage, an attempt to capture footage of the engine under a light load basically caused my video camera to freak out a little bit, resulting in so-so audio quality. However, I can tell you without reservation that these engines have a VERY distinct sound that is all their own. Even at a measely 1/3 throttle, this engine shook the concrete floors of the dyno cell with alarming authority…this engine ain’t no poser, this is one serious unit. 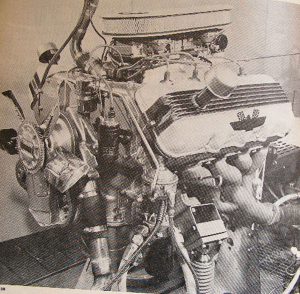 (No, this isn’t the actual engine on George’s dyno, I snagged this pic from a 40-year-old magazine article since I forgot to bring my camera along with me to the dyno session.)